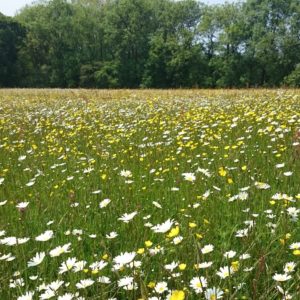 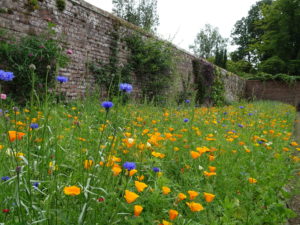 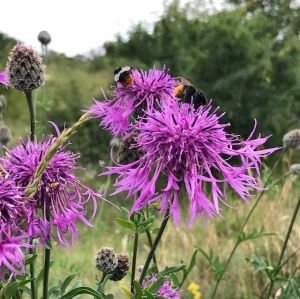 In the first year after planting a wildflower area , there should be some flowers from any plug plants used, often daisies, knapweeds and clover.

The Summer cut in the first year can be early in mid-July and all cuttings should be removed. Through the rest of the autumn and winter keep the sward short like a lawn through mowing (removing all cuttings) In fact the young meadow should be mown every time the vegetation height reaches 10 to 15 cm. Do not cut the meadow shorter than 5 cm.

In following years there should be a greater variety of flowers. Cut the sward in the Spring from March – April to keep the vigorous grasses and weeds in check, then leave it to grow up, flower and set seed. A further cut should be made any time from late July to September to a height of about 5cm after all the plants have shed their seed. Remove all cuttings to gradually reduce the soil fertility and to avoid leaving a thatch which will inhibit the growth of next year’s flowers. During the autumn and winter, mow any re growth as necessary to prevent the grasses from becoming too dominant.

On a field scale, meadows grazed over autumn or winter tend to be the most successful. If yellow rattle fails to establish in the first year, as it is an annual, re-introduce seed in years 2 and 3, therefore keeping the dominant grasses in check!

Factors affecting when to cut

The decision when to cut your meadow will depend on two factors: the species present and the weather. If there are plants or seed of late flowering species such as betony, devils-bit scabious, field scabious, yarrow or wild marjoram for example  you will need to leave the meadow standing until September when these plants shed their seed. If not every year, leave it standing at least 1 in 3 years. This is not a problem if you do not have tough grasses or other perennial weeds threatening to dominate. If so, you could cut the weedy areas earlier and more regularly, whilst leaving the late flowering areas to set seed.

You could cut earlier (end of July) some years and later (early September) from time to time to allow seed fall from the late flowering plants.  As the majority are perennial plants it will not harm them to be cut back early in some years.

In a wet summer, it can be difficult to cut when you would wish to. Compacted ground is detrimental for wildflower meadows so do avoid driving on it in wet conditions. The sward will need to be cut in the autumn and cleared, whatever the weather, as the meadow should be cut at least once a year. Otherwise leaving a thick thatch will be very detrimental to the next season’s flowering species as they will find it difficult to grow through in Spring and will be dominated by grasses and weeds. To encourage the dispersion of seeds once the cuttings have been removed, the area can then be raked to expose some bare earth. If you happen to have a few sheep available Winter grazing would be ideal!

To encourage the overwintering of insects, a margin around the meadow could be left uncut through the Winter, so that the dried stems and seed heads offer food and protection. This area could then be cut then be cut and tidied the following Spring.

Please be patient and do not give up; creating a beautiful meadow will take 3-5 years. However, with perseverance, the results will be so worthwhile, providing visual appeal, and bringing a whole wealth of wildlife to your world!

Potting at PlantWild - the polytunnel is starting

Our Native Jacobs ladder is just coming into flowe

Common poppies on the field margin with blue skies

We are Steven and Lindsay Lister, a husband and wife team who are passionate about growing Wildflowers. Between us, we have a solid base in Horticulture; Steven studied at both Oaklands Horticultural College and Cannington Horticultural college, gaining Advanced certificates in Amenity Horticulture, whilst Lindsay studied at Bath university achieving a BSc Hons in Horticulture.