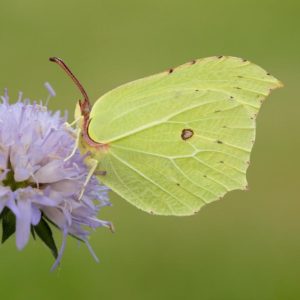 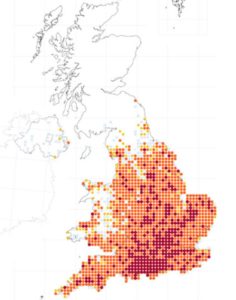 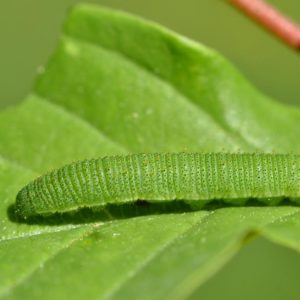 Alder buckthorn and Common buckthorn are the larval foodplants of one of our most spectacular British butterflies, the Brimstone (Gonepteryx rhamni).  The Brimstone has an interesting distribution in Britain, being much more common in the south and east than the north and west, as indicated by the coloured section on the map of the British Isles. The reason for this seems to be that the foodplant is restricted in the north and west.

Alder Buckhorn is a large, thornless, shrub with glossy green leaves that turn yellow, with red berries in the Autumn. It prefers damp, peaty site, therfore a more acidic soil. Purging or Common buckthorn is thornless and prefers an alkalinse soil.  The berries are red and then turn black,and a yellow dye can be made from the black fruits or bark. They are also great as part of a native hedgerow.

The Brimstone is the longest lived of all British Butterflies, and can survive for 12 months. Like other species that hibernate as adult butterflies, the Brimstone has an incentive to survive the winter: to breed and lay eggs in the spring. Brimstones can hatch out as early as July: if they survive the winter they can last until the following July. It is a solitary and powerful butterfly that can fly great distances.

For hibernation, ivy is a favoured foodplant, and the butterfly does indeed resemble ivy leaves. Early in spring, the butterflies may be tempted out on a warm sunny day, but if there is a cold snap will happily return to hibernation. The female gives off an alluring smell in order to attract a male.

Eggs are usually laid in either April or May. A long-lived female may lay fertile eggs as late as July and so may be on the wing at the same time as the next generation emerges in July. Another evergreen shrub used for hibernation is holly. Adult Brimstones have unusually long probosces, enabling them to feed on flowers with deep nectaries, such as the flowers of Runner Bean, Wild Sweet Pea, Teasel and Buddleia. They need to spend long hours nectaring in order to build up fat reserves for the winter.

Buckthorns are great for attracting a range of wildlife to the garden, as the pollen is useful for many insects, including bees, and the berries are a winter food source for birds. In order to attract Brimstones to any garden, we need: Buckthorn Shrubs for breeding, nectar plants such as the ones mentioned above, and shrubs such as holly and ivy for hibernation. Is your garden a home for Brimstones?

The retail space at our nursery was sparkling in t

After the rain. 🌧🌧 Ox eye daisies are just s

The Ragged Robin flowers have a ragged charm that

We are Steven and Lindsay Lister, a husband and wife team who are passionate about growing Wildflowers. Between us, we have a solid base in Horticulture; Steven studied at both Oaklands Horticultural College and Cannington Horticultural college, gaining Advanced certificates in Amenity Horticulture, whilst Lindsay studied at Bath university achieving a BSc Hons in Horticulture.